I am proud to announce the release of the next major version of GPipe on Hackage!

In this post I'll explain the whats and whys and do some demonstration of the new API.

If you never heard about GPipe before, please read on. If you however already been using GPipe for the last six years and just been waiting for the next version to come out, you might wanna skip ahead to the next section.

GPipe is OpenGl made functional and type safe for Haskell. And then I mean really type safe, as in "if it compiles, it runs"! There are already a couple of bindings for OpenGl in Haskell but when you use either of those you are still exposed to the inherently imperative state machine that is OpenGl, and there are a myriad of invariants you need to keep track of that otherwise will cause hard to debug runtime crashes. This is especially true with modern OpenGl (versions >= 3). GPipe is based on the OpenGl 3.3 core profile.

Some examples of things that are awkward or hard to do right in plain OpenGl but that GPipe makes safe and easy:
Since I want shaders to be type safe with respect to the rest of the pipeline (e.g. use same format of vertex attributes as provided in the vertex array) I decided to provide a DSL for the shaders as well. There is no need to learn GLSL at all to use GPipe! (You might wanna learn linear though...)

Where can I get it?

Why a new major version?

If you have tried GPipe 1, chances are that you ran into some memory leaks. And that is the major flaw with the GPipe 1 design: you had little control over space and time. "Space" as in vertex buffers and textures where converted from Haskell lists and cached automatically. To animate a texture for instance, you had to create a new one each frame! And "time" as in shaders were generated and compiled at times that weren't really obvious for the user. In fact, shader source code was generated each frame and the shader cache used that source to pick a compiled shader, or compile a new one. While this cache used a trie to be as efficient as possible, it just didn't scale well.

GPipe 1 also modeled the graphical pipeline as a pure function, something that only really pays out if you are rendering to an image to store offline. If you want to present the rendered result, you are still bound to the IO monad. This perceived purity required a lot of unsafePerformIO under the hood, and in order to prevent different GL frames to interfere there was a lot of explicit forcing of evaluations that bloated the code.

So when I set off to rewrite GPipe I decided on a couple of design principles:

In order to achieve that, I had to kill some of my darlings. For example, the almost magical toGPU function that turned a normal Haskell value into a GL uniform value to be used in shaders had to go. It was the main cause for the shader to be regenerated every frame. Still, I think the end result is just as modular and easier to reason about.

GPipe 2 is not backward compatible with GPipe 1. That also means that auxiliary packages like GPipe-Collada and GPipe-TextureLoad doesn't work with this new version yet.

As for now, there exist one window manager package for GPipe 2 created by plredmond: GPipe-GLFW. Anyone who dares can create their own window manager based on GLUT or whatever if they wanted.

Enough talk! Show me some code and pretty pictures!

Edit 2015-09-02: Added missing language pragmas and fixed indentation that got skewed when entering world of HTML. 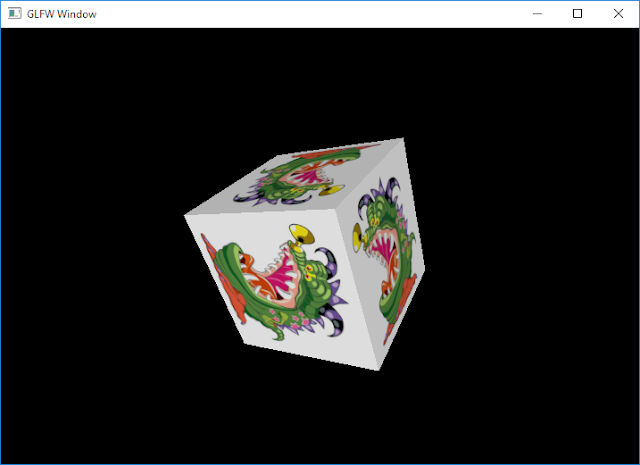 (It is actually spinning)

You need an image called "image.jpg" in the same folder as your compiled program.

Besides linear and transformers, this code uses GPipe-GLFW for window management, and JuicyPixels for loading images.

I wont go into the details of the code today, but will instead cover all of it and more in a tutorial that I will publish as a series of blog posts here on this site. I trust you are adventurous enough to make some sense of the code on your own in the meantime, maybe with a little help from the haddocks. I expect you to find bugs, and when you do please report them to https://github.com/tobbebex/GPipe-Core/issues.

In order to reach feature completeness I had to leave a couple of OpenGl 3.3 features out for GPipe 2.0, but now starts the time of bringing them in! I'd like to have the communities feedback first on what features you need. Some suggestions on features currently not in GPipe 2:
Let me know what you want, at https://github.com/tobbebex/GPipe-Core/issues, or by email to tobias_bexelius snabelA hotmail.com, where "snabelA" is Swedish for "at".
Upplagd av Tobias Bexelius kl. 12:54